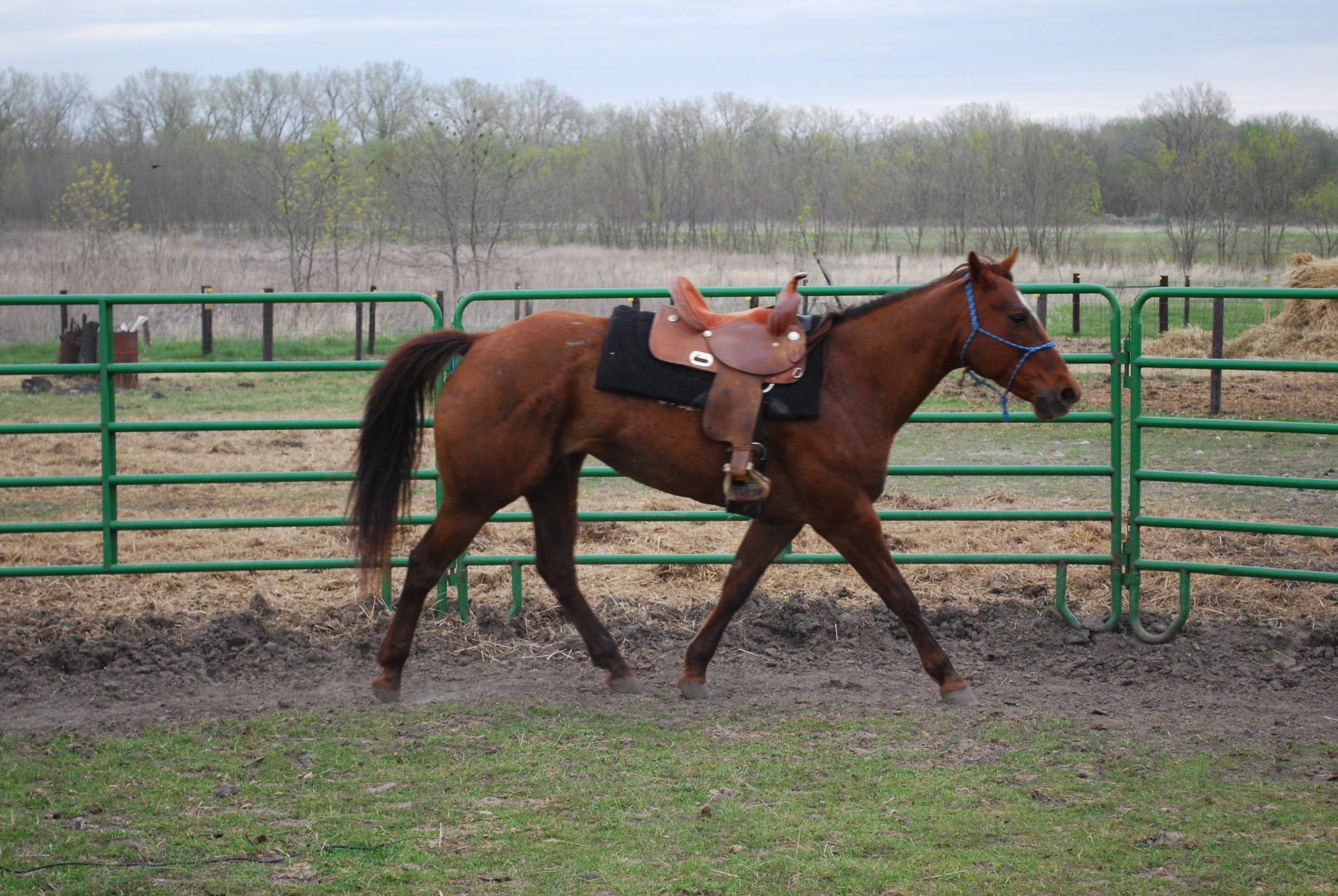 I went out to catch Rain on my own, sans cookies or grain. I did place the halter in my hoodie pocket, so my hands were free. When I was about 10 feet away, she took off, but not too far. I started whistling softly and she turned around and walked towards me. I started backing up and continued to whistle. When I stopped, she stopped. I waited for her head to drop and she started licking and chewing. I walked towards her and when she â€˜lookedâ€™ like she might leave, I whistled and stepped back. She eventually came to me and I was able to slip the rope around her neck. I had a caught horse in less than five minutes!

AS promised, I offered her grain the minute we walked in the barn and we repeated the routine from Monday. I would whistle softly then let her take a bite.

One issue I discovered early with Rain is her discomfort when lead from the right side. Any time I am on the right, she tries to turn and face me or back up. Our first exercise for the session was hand walking, basically taking a walk around the arena on a loose rein, with intermittent halts and walks. On the left she is more confident and will walk shoulder to shoulder. On the right, she side-passes all the way around the arena.

I started walking (body and face forward, holding the lead with my left hand) and used a short dressage whip to prevent her from walking behind me. I also took deep relaxing breaths. About halfway around the arena she took a few steps forward and then turned to face me and pulled back. I smiled, positioned myself next to her the best I could, and started forward again, gently tapping the whip to get SOME motion from her. We continued this dance for about ten minutes, but the end result was a horse that finally made the transition to being led from the right side, shoulder to should, all the way around the arena.

I also spent 20 minutes doing the long reins on a circle. My goal was to try to keep as light a contact as possible because my hands were raw from Monday’s session. Rain had been heavy on the bit and constantly pulling against the lines. My strategy for the second session was to drift with her enough to keep the lines soft, but firm enough to control her speed and direction. I did not want her running away or pulling the lines through my hands.

The result was a soft, supple horse. She was rounding her back nicely and dropping her head and neck below her withers with a nice arch. She was also less chargy and more attentive throughout the full session. She never escalated into a turbo trot and never ripped the lines through my hands. The difference between the Monday session and Wednesday session was night and day, and I wish I had it on video!

We finished the session with mounting block work. She does not want to line up to the block and will turn her body to face me as soon as I say whoa. WE worked the block for about 10 minutes and finished when I was able to lay across her back from the block.

All in all, an AWESOME session!

Rain is an 8 year old draft cross mare. She has some emotional baggage. In Monday’s session she ran away from me for about 20 minutes and three of us had a hard time catching her. Once caught, I gave her a small scoop of grain and made her follow me around the arena. Every time she took a bite, I softly whistled to help teach her to come to my whistle.

Rain’s habit is to run from people and in past lesson sessions we have played a “move the fee” game as long as she is running away from us. I wanted to put that forward energy to use and control her direction the whole session, so I put her on the long reins and I made her do circles at the walk and trot.

All I was looking for this session was calm, attentive, willing, and adaptable. I did not encourage her to run away from me; I used the long reins to control the speed of her trot and when she started to run from the pressure, I slowed her to a walk and waited for her head to come down and eyes/ears to get soft.

Long rein work is fascinating. I never escalated Rain into a turbo trot or canter, yet after 30 minutes of walk and controlled trot, she was dripping. Someone watching the session would not have believed she would get so sweaty from the workout.

Long rein exercises help balance horses and encourage them to use all their muscles, especially at the walk. So in actuality, the horse uses more muscles in a concentrated effort at the walk than at the trot. The trot allows the horse to use momentum to maintain balance, and so the horse does not actually have to rely on using all of its muscles optimally. Long rein exercises equate to Pilates or yoga in the people world. Horses use muscle groups they are not used to using on a regular basis, and so they tire more quickly and sweat more readily.