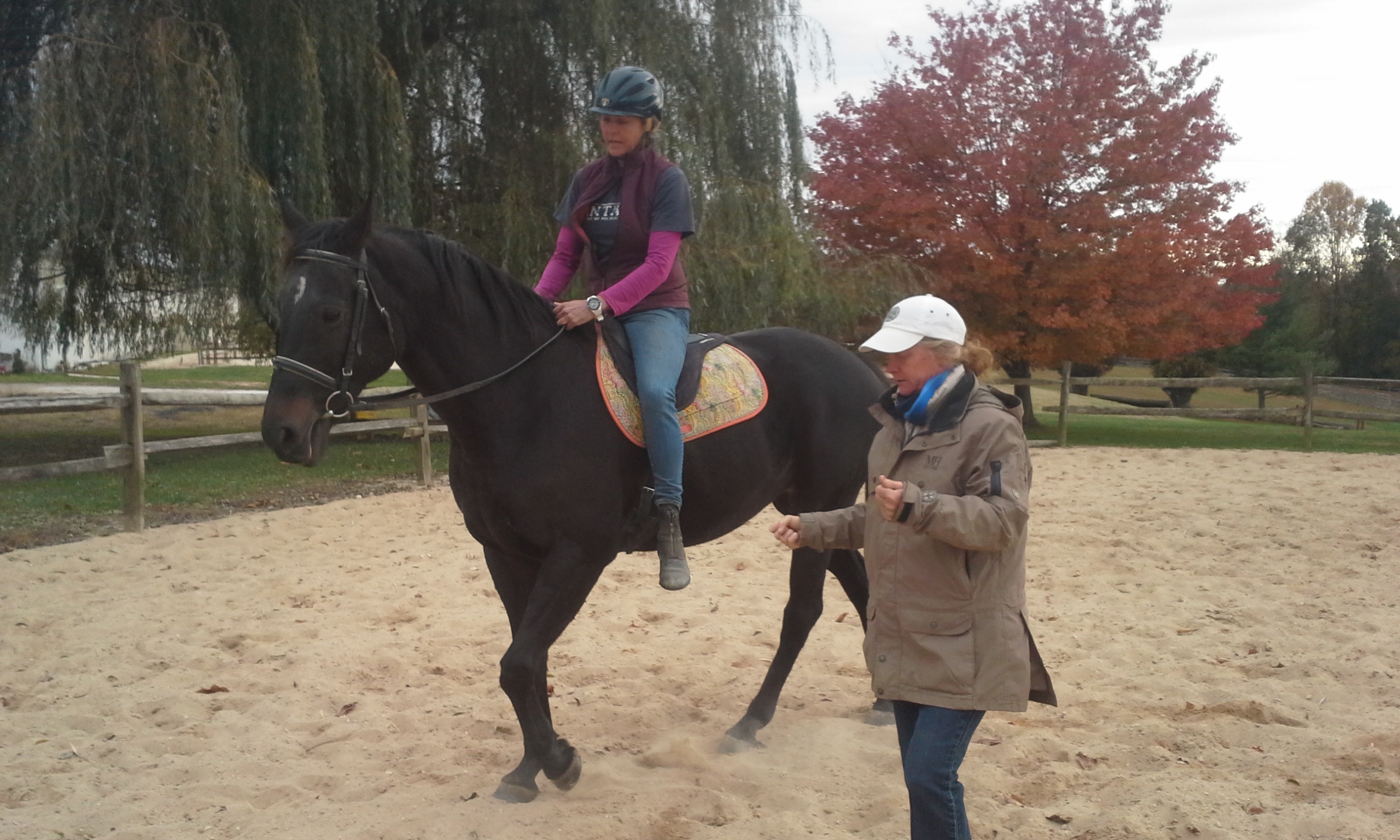 Posh arrived in Monkton, MD on a chilly November night in 2008.  She was shipped from a warm Ocala horse farm directly to a renowned breaking and training barn.  A six year old warmblood mare, green and hot but with a sweet face, kind eyes, and loaded with potential.  What we did not see was the incredible amount of baggage Posh carried deep within.

I met with the gentleman charged with the challenge of making Posh the horse we’d been waiting for.  Experienced and confident, he estimated the mare’s time there to be no more than 12 weeks.  At $2200.00 per month, that sounded fine to me.  After that, we communicated once a week with progress reports and on Posh’s well-being.

The first couple of weeks were more or less fine according to the report, “Just needs to get used to her new surroundings”.  The second month revealed some resistance and the statement “She’s big and strong, George” (that’s me).  Well, from then on there was little or no progress to report, and, at the end of a four month and three week endeavor, the famous horseman/trainer informed me that in all his many years of breaking, only once did he not succeed.  Posh was the second.  Not knowing what to say or do, I asked him his advice, his reply – “How about the rodeo?”

Kristin came into my horse world midway 2011.  Our daughter, having graduated high school, was set to leave the country and the horses for college abroad, leaving a vacancy for a partner to help with the upkeep of 3 horses.  By this time, Posh had been with 3 different trainers.  There had been some success with them but nothing sustainable.  I never would admit to anyone, not to my daughter nor to Kristin that I was slowly giving up hope.  It was becoming evident that this beautiful, expensive, dreamlike horse could only be admired making her way around a lovely field, grazing with her herd, and nothing else.

Not long after Kristin became fully acquainted with my three horses, she strongly suggested a farm move.  The choice was one of higher quality paddocks, more acreage, and smaller herds.  Once we were all settled in our new home, the joy of being in a much drier, cleaner, and hilly environment was great.  Soon our horses were showing much improvement in weight, feet, and overall health, including dispositions.

After a while Kristin, who had taken on the Posh project, decided to allow the resident barn trainer to have a go with Posh.  The trainer, more than competent, was given the entire history of Posh’s training attempts and consequent failures.  The first couple of days of ground work went well.  Then the training moved to a small ring close to the barn for some under saddle time – again no problem.  When the day arrived for Posh to graduate to the larger, big girl outdoor ring, things went terribly wrong.  The outdoor ring is a fair distance from the confines of Posh’s barn and little paddock.  It meant that, after being tacked up, Posh with trainer mounted, would make their way slowly up the road to the ring.  The trainer had walked Posh twenty to thirty yards away from the barn when Posh stopped.  The trainer tried some normal friendly coaxing to no avail, then resorted to firmer demands.  The mare quickly became overcome with fear and went out of control.  Without any concern for her rider or whoever may have been standing in front of her, she reared and bolted back to the barn, throwing the rider in her tracks.  Thankfully, no serious injury to horse or rider occurred, but Posh was deemed to be very dangerous by the barn owner and it was clear that we were about to be asked to move to another barn.

Over the next six months or so, we slowly convinced the barn owner that Posh would not pose a danger to either staff or boarders and I suppose that the fact that we were boarding two other horses there (angels both of them) aided in allowing Posh to remain.  What also remained was the stigma that Posh was an uncontrollable horse and a conversation piece at the water hydrant.

Well, one day Kristin came across a training seminar taking place at a farm on the other side of the county.  This program was different from other schools of training.  It stressed an emphasis on mind, body, and balance, and reported a number of successes with local problem horses.  It was the Wexford training program, headed by Kirsten Nelsen, and it was soon to be a last hope for our Posh.  Kristin attended the seminar, read a very informative booklet, and soon had my permission to sign Posh on.

Kirsten Nelsen arrived at our farm on a Saturday afternoon and met Kristin and, in a matter of minutes, they were on their way to retrieve Posh from her stall.  From the moment Kirsten attached the lead to Posh’s halter and started out of the barn, she picked up signs of what soon was to become a difficult project.  But after the first session and what seemed to me very little positive signs, Kirsten assured us that Posh could obtain a life as a normal, healthy, happy horse on two conditions:  follow the concepts and techniques Kirsten would be instructing, and secondly which was solely directed to Kristin, to cultivate an absolute commitment to patience.  Kristin agreed and the journey began.  Our mare had serious issues with all three of Kirsten’s trilogy of mind, body, and balance.  She was loaded with anxiety, a rear leg that did not function fully, and uneven hip alignment that made for a very uncomfortable life.  The monthly training sessions brought techniques and skill sets that addressed all the above.  Each session saw a progress, sometimes a little but mostly a substantial amount.

I wanted to tell Kirsten at the start of every new session how diligent, persistent, and how patiently Kristin had been working with Posh.  I wanted Kirsten to know the devotion and love Kristin gives in this mission, but it was never necessary.  Kirsten knew very well all the time and work that has gone into this program and what it takes to achieve goals in the miraculous process.

Today our mare with the new training techniques implemented and the aforementioned work, is well on her to becoming a lovely, well-adjusted horse.  Posh is currently being ridden by Kristin in all the riding rings and back and forth to her barn – all to the astonishment of barn staff and boarders.  The barn owner is particularly surprised and regularly offers her congratulatory remarks.  Kirsten Nelsen, quite frankly, transforms horses and people.  Our mare’s disposition changes just by being in Kirsten’s presence, and I’m sure that goes for any horse.  The whole process is so amazing, I sometimes can’t believe it’s happening, but then I see Kristin and Posh riding around and all I can do is shake my head.