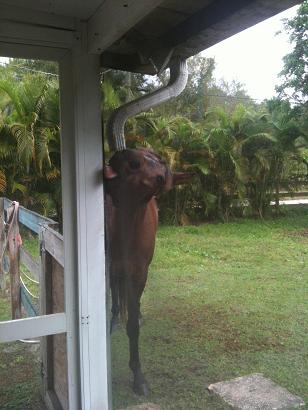 Jasper, my youngest horse at 5, is the kid around here. Jasper was sent to me by a client when he was a year and a half. I was going to care for him, get him started and help the owner sell him. At the time I had 3 horses, Mic, Prima and Pizano, so I didn’t want another one.

Jasper looks like a mini version of Pizano so I nicknamed him Pi Squared. Lesson learned – don’t nickname any horse that is for sale!

When Pizano died it was gut wrenching. My plan was to just have two horses and move on. But Jasper’s owner had other plans. She knew I adored Jasper and made me a deal I couldn’t refuse. Long story short – I have 3 horses again.

Now I can’t imagine my life without Jasper. He is an old soul in a young body and he makes me laugh daily!

His nickname rapidly changed to “the monkey” and when I finally moved him onto my tiny place with Mic and Prima. The other horses immediately put Jasper in training. Jasper, the monkey, wreaked havoc his first month at home but with daily lessons from me, Mic and Prima he finally settled in and finally began to mature. The daily bite marks tell me that Jasper is still not up to snuff in Mic’s opinion.

Jasper has been a late bloomer. He has always looked about a year or two younger than his actual age and so I have been very slow to get him started under saddle. At 5 he has only carried me for a few rides so far. But I didn’t start Prima under saddle until she was 6 and she seems better for it. For all the mistakes I made with Prima, she has never taken a lame step. So I am in no hurry with Jasper.

Just letting Jasper grow and training him on the ground has proven very valuable. Not only is Jasper a confident young lad now, he finally decided to grow more. Giving his body time to grow has allowed him to turn into a beautiful, strong horse. Just because most horses are started under saddle at 3 does not mean they have to be started at that age. Giving a horse’s body time to mature before riding is part of what keeps them sound for life. There is no real reason we have to get them ridden by 3. Starting a 5 or 6 year old is exactly the same as starting a 3 year old. If the body simply does not mature by 3 then we can set up challenges and patterns in the body that also last a lifetime and become difficult to correct later. Waiting for a horse to look strong enough to carry a rider does not make them more difficult to start under saddle, it makes the job easier on both of us.