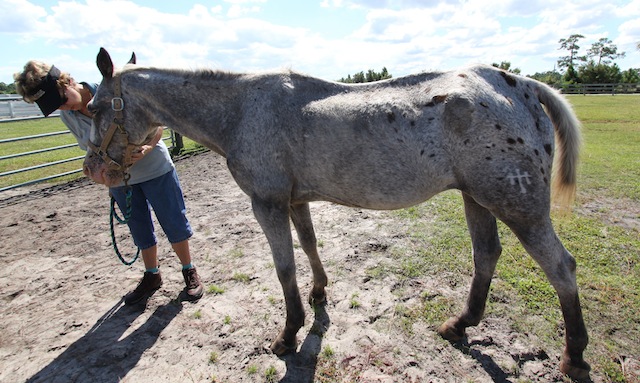 Horse Geeks Blog
Change at Any Age: The Story of Grace

During certain stages of my life, I remember thinking, am I am too old to make this big of a change. This thought has crossed my mind every decade from teens, twenties, thirties and even in my forties. At least now I can recognize that self-defeating thought and have learned from experience that it is never really true, it is only a belief.

I know I am not alone in my struggle to override the – I’m too old bomb – because I hear those very words come out of my students regularly. If it is not in reference to themselves, then it is in reference to their 10, 12, 15 or 19 year old horses as we begin the rehab process.

As always, I learn my greatest lessons from the horses directly, and overcoming the I’m too old bomb was no exception. So I share with you the story of a horse that is particularly inspiring. I’m sure it is no cosmic accident that her name is Grace.

The Story of Grace

Grace arrived at the horse rescue in early December 2010. She was in rough shape; almost skin and bones. Not only had she been nutritionally neglected, the vet estimated her age in her mid to late twenties and she had problems with her eyes that would cause her to slowly go blind. Did I mention that she also showed symptoms of Cushings disease? Grace was a horse that some people might have just put down or most would have put out to pasture for retirement.

But Grace caught the attention of a volunteer named Liz. Liz loved Grace’s sassy spirit and took Grace on as a personal project. Several times a week Liz would come to the barn spending time doing whatever Grace was capable of doing. This involved lots of grooming, hand grazing and gentle walks for the first few months. With Liz’s attention Grace began to put on weight and heal.

About 4-6 months after Grace’s arrival she was finally ready to do more than just hand walking. Liz and I worked together introducing Grace to the long reins, then the Balance Bands and even figured out how to do lunging and some liberty work with a mostly blind horse. Liz became Grace’s eyes while long-reining around the trails and coping with obstacles. Their bond became even stronger and Liz began sponsoring Grace, with the intention of one day taking her home.

Of course, along the way, Grace, Liz and I would run into those kind souls who would question what we were doing. Wouldn’t it be kinder to just put her out to pasture? Isn’t she too old to change? Someone would chime in, echoing my own past beliefs. But by now, I have finally had enough experience and enough success stories that I kept my mind open and helped Liz keep her mind open to the possibility that Grace could not only recover her health, but also be a riding horse. Even if Grace would never be strong enough to be ridden, we kept moving her in that direction for the sole purpose of restoring her health. Just throwing a horse out to pasture and feeding regularly does nothing to help restore fitness and health. The really ironic part of working at the horse rescue was that the volunteers (doing very physical work) were mostly retired people. Turning a horse out to pasture would be like sitting your aged parents down in front of the TV and just bringing them food. Not a nice life for someone’s sunset years.

…Less than a year later… Grace not only was able to regain her weight, she had put on a substantial amount of muscle too. Her development was all with groundwork at this point and no riding.

The lesson for me was realizing that Grace herself never had the belief that she was too old or too far gone or too damaged to recover her health. She loved Liz and showed great enthusiasm during her work sessions. Was it hard for her? Yes! Grace struggled at times and got quite tired in a short amount of time during the early stages of work. But Liz stayed respectful and kept working with whatever Grace could do. To Liz’s credit, she also never got in a hurry to ride Grace. Her agenda was to help Grace through rehab and hopefully riding her one day would be the icing on the cake.

By just enjoying the journey and letting go of riding as the ultimate goal, both Liz and Grace got to enjoy every step of the process. For me, it was a beautiful thing to watch unfold.

I re-started Grace under saddle for Liz. A re-start is basic training, like starting a green horse under saddle, but is called a re-start because the horse had been ridden at some point. I spent the first ride teaching Grace how to stop and how to walk slowly instead of racing! The girl was fired up and feeling great. I only got to ride Grace about six times but even after just six rides Grace was able to balance well enough to offer a reasonably collected walk. She was holding a slower, more balanced walk for about 30 minutes and could have been trotting within another month or two.

Liz took over riding when she moved her to her new home continues to build strength in Grace through the groundwork. I am so very thrilled for Grace and Liz, in their new riding relationship!

Looking at Grace’s intake photo reminds me once again, it is never too late to get started. Sometimes just stepping onto the path of rehab, or the path of learning, yields results that exceed our greatest expectations.