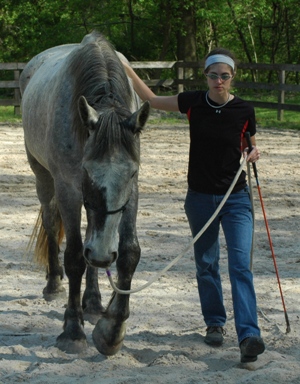 In the beginning, as with most things, you often begin by wandering aimlessly until an action starts a chain reaction that brings you to a point in time when things converge. And so my journey has been.

My story begins quite a handful of years ago, though not as a child. I wasn’t blessed grow up in a horse-household, and so my connection with the horses that were in my blood remained on paper until I was much older. Events came together and showed me a view of the traditional style of teaching, which I was not able to accomplish. I struggled and was miserable, but had no concept of any other way. I left that situation and as time rolled on a door opened to a much more natural type training and I was finally able to find a method I felt good about, and could learn. After several years of studying and working with other people’s horses everything finally aligned for me to purchase my own horse. After several months of searching, the new journey with Storm Watch finally began.

Storm’s journey started six years before I found him, and from the little I know it started in the kindest way possible, as far as a horse’s journey goes anyway. He was started late, which is always a good thing, and by the time his first six years passed he had spent a few months in dressage training, and some training with a natural type person (with tarps and barrels is what I was told), done a little jumping, and had already been out hill topping with the hunt.

We found each other because the teacher always finds the student, even if the student isn’t conscious of the relationship. The journey began with the struggle of getting to know a new companion. With people at least there is choice involved, with a horse, there is only the choice of the human. With time and dedication the layers of the horse begin to reveal themselves. Some wonderfully positive, and others much more of a challenge.

Storm, being himself, is a challenge in that he is large. 17.3 hh and 1,895 pounds large to be exact. Many things that most people would write off with a small horse are actual problems with a larger horse. You simply don’t get to manhandle something that is that much bigger and infinitely more powerful than you are.

Storm quickly revealed that he was the leader of the herd, and that fact went undisputed from the moment he stepped foot among them. There were challenges, but nothing more than a threat was ever uttered among the rest of the herd. He also revealed himself to be a quiet gentle leader that rarely had to exert more than a twitch of an ear to set another in their place. And he certainly wasn’t looking for a leader outside of the pasture either. He demanded that I be the best herd leader in order for him to respect even the simplest of requests. He forced me to step up my game in order to even register in his radar at all.

Storm also quickly showed me that he had some body challenges. He was reasonably cooperative with most suggestions until I asked him to move off on a circle to the right. He very firmly (in his rather large way) refused to do so, and would be quite creative in his objections, often finally moving to the right only to quickly flip around and tear off to the left as if chased by a demon. Ever so slowly, one lesson at a time, one month at a time, we began to peel back Storm’s layers and help him begin to find balance. With the assistance of body work from Jeffra and many slow hours of hand walking he began to find his balance again. Our rides began to get more focused as I learned to support his balance.

After a year and a half of getting to know him and developing our relationship I needed knee surgery. Despite being out of commission, Kirsten still worked with Storm for each of the lessons once a month. It became apparent when she was able to push him a little bit that he was still a long way from being strong and balanced. Only getting worked once a month through the winter proved to be a set back in our relationship. Once I was finally able to begin working with him again, he had other ideas. Leaving him to be more focused on the herd and on himself, he was not interested in finding his balance and everything converged on a windy day with lots of chaos going on in his environment. The plan was to begin long lining him again to work on his balance, and that went straight out the window when he decided it was a good time to do his dancing giraffe impression. It rattled me so much that I had to pass him off to Kirsten so that she could help him find calm again, and give me time to unfreeze and find calm myself.

At that point we went back to square one. The round pen became my friend and my safety net. Storm was free to cavort and do whatever he needed to do and get it all out without concern of hurting me. It was empowering to be able to stand calmly in the center of the round pen while he bucked and raced around the 60′ circle. Some days it was a challenge to get him into the safety of the round pen, but slowly those days became fewer and further between. The reward of the time spent there was tenfold. There would be moments when Storm would absolutely look to me for companionship, and for enjoyment. He would come out of the hay feeder just to say hello and head out to play. Slowly but surely he found calmness at the walk, and then began to find balance at the walk. Kirsten guided us into moving upward in the gaits to improve impulsion and ever so slowly he began to find balance at the trot, too. His canter was improving by default, but was still a tool to reset the impulsion when he needed it.

And so here we are. We are finally getting out of the round pen and into the arena back on the long lines and even into the balance bands. Storm’s body is showing the positive effects of the diligence with the work, his top line looks beautiful, and his body overall is getting softer and more rounded. We have so far to go, but looking back over the two years that we’ve been on this road together we have come so far together. We just keep having our brain storms and keep moving forward.