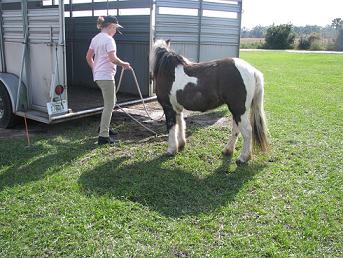 I recently helped Jim McDonald (another local trainer that works at our equestrian center) with a clinic, and enjoyed riding with a group for the first time in a very long time. Storm and I have been progressing, and it was nice to push our boundaries again in a simple and safe environment. The clinic was focused on trail obstacles, and the plan was to head out on the trail after lunch. However, some rains rolled in, and we didn’t even get the change. We managed to just get into the barn when the bottom fell out. I worked to get my things put away as the rain poured so loud you couldn’t hear anyone speak unless they shouted into your ear. Eventually the storm slowed, and a few of the participants made a break for it. It was lightening up as the last few riders pulled their trailers closer to the barn and began loading their horses.

Nancy and I were working around the barn when one of the participants came back down in the barn asking for help with loading. I followed her back out to her trailer, and discovered that her little Paso was pretty adamant about not getting back into the trailer. He was pulling every trick in the book to avoid getting onto the ramp from bracing backwards as hard as he could just in front of the ramp to swinging around the side of the trailer to avoid the ramp. She asked me to stand to the side to keep him “lined up” with the ramp so he wouldn’t hurt himself stepping off the edge. I was a bit more skeptical of being up close to him and allowing him to push into me, it was obvious to me that he didn’t have a whole lot of respect for her space, and she and he had a relationship where she leaned on him and he leaned back on her when he didn’t want to do something. It was a recipe to get run over, and I wasn’t going to go there. I supported gently, and attempt to raise and lower my arm to help encourage him forward, but all he did in response to that was brace more. She then asked me if we should get a lunge line and another person so he can be forced on from behind. I told her that there wasn’t any reason to do that, and that is just not a safe manner to get a horse into a trailer. She responded, “Oh, that is what we did when we were here for the last trail competition, someone that said they were a trainer suggested it!” I sadly shook my head and said there wasn’t a reason to get to that point. Maybe in an emergency if the horse absolutely has to get on the trailer NOW then it would be reasonable, but there wasn’t any pressure in this situation and I didn’t want to do anything to further exacerbate his opinion of getting onto a trailer. I asked her if I could take him and give it a go, and she said yes, so I took the lead rope from her.

I was really wishing I had my rope halter and longer lead line, but I figured I should sort it out and make do as it was rather than try to make too many changes at once. I began by simply leading him around and establishing a bit of leadership and balance. I walked him around for a while, slowly getting closer to the trailer, but not going in. I wasn’t worried about time, or the trailer or anything else. The closer we got to the trailer on each pass the more he resisted, and so I spent quite a bit of time simply walking back and forth to and from the trailer. Finally I stepped up onto the ramp and was met with brace at the end of the line. He eventually put his front two feet on the ramp, and so I waited a bit, and then walked off again. Lather, Rinse, Repeat. We eventually managed to get so far as getting his front hooves to the top of the ramp, and a hind food almost on the ramp, but he seemed to be fairly well stuck there. She asked me at one point if I wanted to get a dressage whip, and I declined, mostly being concerned that one person was going to have to be in the trailer, and the other person outside. The thought of her being on the whip end and me in the trailer didn’t make me feel very good, but the flip side was her at his head in the trailer and me with the whip… I didn’t like either scenario as I wanted to keep her out of the picture as much as I reasonably could as he was responding much better to me at that point than he had to her. So I kept chipping away, lather, rinse, repeat.

Finally I decided that he was pretty well stuck and I need to try a different option. I asked her if she wanted to go into the barn and get the whip or if she wanted to hold him while I went for the whip, she said she’d go, so I told her where it was, and she set off to the barn. The first thing that happened is that the little Paso put three feet on the ramp. He was much more inquisitive and relaxed without her standing there bearing down on him. I began to wonder if there were more things I could send her for in the barn. I really felt like it wouldn’t have taken me that long to get him onto the trailer if she wasn’t with us. I knew that wasn’t an option, so when she returned with the whip I led him away from the trailer to establish a bit of communication with the whip and make sure that I knew how he was going to react to it outside of a confined space.Â  First I had to remind him that I had a bubble and he wasn’t allowed to throw his shoulder into me and ignore me. I rubbed him with the whip and then gently tapped him on the top of his hip.

As soon as he shifted forward, I quit, and rubbed him again. Again, I tapped lightly, he stepped forward, and I stopped and rubbed. He was doing better than I anticipated, so I walked him for a moment, and then returned to the trailer. He balked again, so I stopped, rubbed him with the whip and gently tapped him on top of the hip. He placed his front feet calmly on the ramp. I rubbed him gently and gave him a moment and gently tapped again. He stepped forward again, calmly and evenly. Rub, tap again. Suddenly all four feet were on the ramp, and there was no resisting, balking, bracing or hesitation. Rub, tap, steps forward. Lather, rinse, repeat. As quietly as he started, he was suddenly all the way in the trailer, and his owner gently picked up the butt bar, and closed him in as I closed the chest bar. He was nervous, but standing quietly. She was so grateful that she gave me a $20.00 donation to give to Graham, which was nice of her.

The lesson here? Do what you know works. I’ve been taught techniques that are effective and are the simplest way to achieve things with a horse. I need to trust those methods, and not do the things that I know are not as effective. Looking back on the situation, I was really grateful to have the experience and be able to get a chance to work with another horse that gave me the gift of another learning experience.